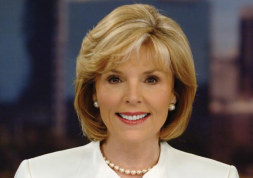 Veteran anchor Barbara West, who has been with WFTV’s Eyewitness News for 24 years, is leaving the station.

Despite a long career in Orlando in which she was Channel 9’s health reporter and anchor for various time slots over the years, she is best remembered — at least from a national perspective — for her satellite interview with Sen. Joe Biden during the 2008 presidential campaign. She asked Biden “How is Senator Obama not being a Marxist if he intends to spread the wealth around?”

Biden’s reponse: “Are you joking? Is this a joke? Is that a real question?”

Locally, West is well-known on the charity event circuit.

West, who has been the station’s longtime noon and 5:30 p.m. anchor, started to she her role diminish in the past several months. She was taken off the 5:30 news to make way for rising star Vanessa Welch.

NewsBlues said “West will likely use accumulated vacation days, and is expected to sign off soon.”

Supposedly unhappy with how WFTV anchor Barbara West conducted an inteview with Democrate VP candidate Joe Biden, the Barack Obama campaign has told Channel 9 not to expect any more interviews through the duration of … MORE

Too many hugs for Casey Anthony? That’s what local stations say