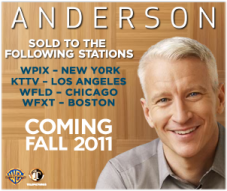 Anderson Cooper may not be the next Oprah, but the folks at WESH are hoping he’ll at least be the next Dr. Oz.

Just guessing here, but I suspect “Anderson” will get the 3 p.m. timeslot that Dr. Oz now occupies on WESH. Channel 2 will lose the good doctor next year to WFTV-Channel 9, which will put Oz in Oprah Winfrey ‘s 4 p.m. spot as the lead-in to its top-rated Eyewitness News.

One other interesting note:  Fox grabbed Anderson for its owned-and-operate stations in Los Angeles, Chicago and Boston … but not Orlando.

The Orlando Sentinel’s fun summer online contest, the Orlando Celebrity Smackdown, has its championship match up. The winner among all the local television personalities is WKMG chief meteorologist Tom Sorrells. He reached the finals by knocking … MORE

Here’s an Anchor Idea for WESH

Go ahead and call me crazy. But what if WESH did something dramatic with its anchor line-up … like move Pat Clarke over one seat, from sports to the main anchor chair next to Wendy … MORE

Here are WFTV’s and WESH’s promos for their new morning newscasts on their sister stations. >> Click to watch