Etc.: Started market’s second 4 p.m. newscast in 2005. (The first on WESH lasted only about a season in early 1990s)… Only station in market with regular editorials, by General Manager Henry Maldonado … During a low point in ratings in 1980s, almost hired Col. Oliver North’s secretary, Fawn Hall, as an anchor to try to grab viewers. … Fox News’ Shepard Smith was a reporter here, and Trace Gallagher was weekend anchor. … Former WESH news director Ed Trauschke was a longtime reporter at Channel 6. … Station celebrated its 50th anniversary in July 2004 … Was the first station in the market to replace its original studios, building new one in 1982 on John Young Parkway. .. Made Annetta Wilson the first African-American anchor in the market in the early 1980s. … Produced a 10 p.m. newscast for cable, then moved it to WKCF and produced it for that station for a number of years before WESH took over the production of the newscast.

Station History: Orlando’s first station (then known as WDBO – “Way Down By Orlando”) went on the air in July 1, 1954. It would become the longtime dominant station in the market with lots of local shows such as Central Florida Showcase (a news discussion show), Uncle Walt’s Adventures, Hunting and Fishing and, of course, Romper Room. When Columbia Pictures was considering buying the station from Outlet Co. in the early 1980s, the call letters were prematurely changed in 1982 from WDBO to to WCPX, for Columbia Pictures. The deal didn’t go through, but the call letters remained. First Media ended up purchasing the station and, basically, ran in into the ground. Still, when the station was put up for sale in the mid 1990s, there were lots of suitors. Meredith Corp. purchased the station in 1997, but it already owned Fox affilate WOFL-Channel 35 — and at the time such a duopoly wasn’t allowed. Meredith decided to keep WOFL and trade WKMG to Post-Newsweek (which had also bid on the station) for a P-N station in Hartford, Conn.  Post-Newsweek changed Channel 6’s call letters a third time, making it WKMG in honor of Post-Newsweek’s Katharine M. Graham. This also gave Post-Newsweek some Sunshine State symmetry, since its Miami station, WPLG, has its call letters from Phillip M. Graham.

(click on any image below to see the complete gallery) 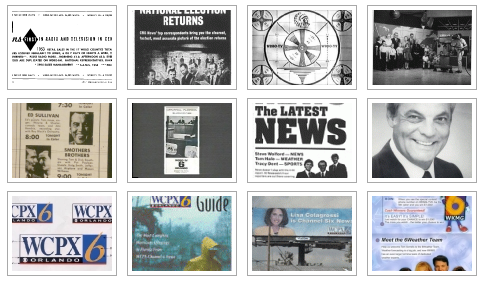