This picture (pointed out by former O-Town anchor Scott Walker on his Twitter feed) is from Nashville’s WTVF-CBS 5. It was snapped by a viewer during the station’s coverage of severe weather on Saturday and posted on the Facebook group, “I survived the Great Nashville Monsoon of May 1st.” I think this graphically  illustrates why you don’t want your weather guys drawing on the screen during severe weather. And speaking of weather, the RogerSimmons.com weather station is now working again, but we’re still awaiting some key replacement parts to arrive this week. Then, everything will be, uh, back up and functioning fine again. 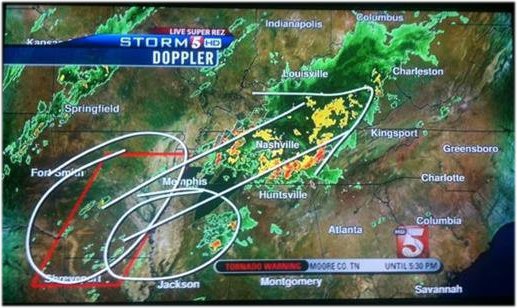 New meteorologist at CFN 13 is …

Tipsters say look for Pete Caggiano to be the new meteorologist on the staff of Central Florida News 13. Caggiano was the weekend meteorologist at Gainesville’s WCJB-ABC 20 from 2004 until May of this year. … MORE

WOFL promises new $1.5M radar will be most powerful in state

WOFL-Fox 35 is upping the ante in the area’s Doppler competition, announcing plans to build a $1.5 million Dual Polarization radar it says will be more powerful than all the other radars in the market … MORE

All of the area media outlets did an outstanding job with coverage of Friday’s deadly tornadoes. They alerted viewers overnight about the tornado warnings and then went wall to wall with more than 12 hours … MORE