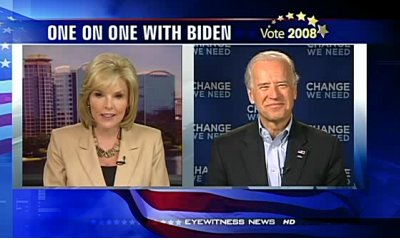 Among them was this rather bizarre one, which raised the ire of the Obama campaign:

Biden’s reponse,” Are you joking? Is this a joke? Is that a real question?”

Watch the interview for yourself, then vote in our poll on the right.

Good morning, Orlando. You may not realize it, but you’re waking up in what has become the most competitive market for morning news in the nation — with more local news, with more national news … MORE

While No. 1 in our hearts, Orlando is still No. 19 with Nielsen

Some quick takes on Orlando TV news before the holiday weekend … The Nielsen market rankings for the 2011-2012 TV season have been released, and Orlando remained No. 19 in the nation. Nielsen estimated the … MORE