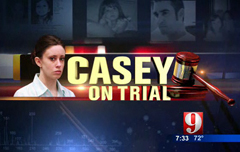 The Orlando TV ratings for the Casey Anthony trial continue to be amazing. And WFTV-Channel 9 News Director Bob Jordan is very pleased with what he’s seeing.

No retirement plans yet for WFTV’s Bob Opsahl

There’s been a lot of speculation about vetran anchor Bob Opsahl’s future at WFTV. News director Bob Jordan has hinted at pending retirement for his star newsman, and that talk ramped up after new weekend … MORE