As any avid visitor to this site knows, I love news and old news video. I came across some new “old” video that I hope you’ll enjoy too. Here’s a WFTV Eyewitness News promo from nearly 25 years ago — 1984. It features then-Channel 9 anchor Bob Jordan (now the station’s news director — again), anchor Martie Salt (before she left Channel 9 to go to Tampa), iconic weatherman Danny Treanor and anchor Bob Opsahl. Just after the promo is another with Salt, then a middle-of-the-night news update from anchor Ted Russell. 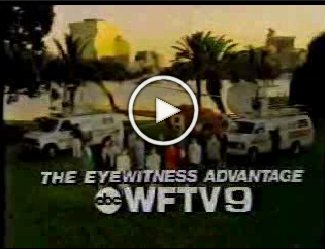 WFTV anchors, reporters move on up

Some midweek quick hits for you: Cynthia Demos, the latest anchor or reporter to depart WFTV, says the reason is simple: “When you work at Channel 9, other stations recruit you,” Demos said. “They know … MORE

Blast from the Past focuses today on WFTV-Channel 9 and ABC. This ad is from February 1969, promoting the ratings-challenged news on ABC and Channel 9. Frank Reynolds was the anchor of the “ABC Evening … MORE

O-Town news from out of town