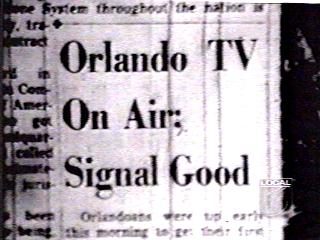 Today is a historic day for Orlando TV for two important reasons, with something old and something new.

First, it was on this day 57 years ago that television began in Orlando. WDBO-Channel 6 started broadcasting, airing shows from CBS, NBC, ABC and DuMont. It would be the area’s only TV station for two years until WESH-2 began in Daytona Beach.

Adding to the importance of July 1 in Orlando TV history, the area’s new home for PBS  — WUCF-TV — begins broadcasting today on channel 68. It replaces WMFE-Channel 24, whose new owner will flip it to a religious format shortly.

“These organizations have done an outstanding job coming together to ensure that everyone in central Florida can continue enjoying their favorite PBS content, on television and online,” PBS President and CEO Paula Kerger said in a news release Thursday. “WUCF will offer a full range of PBS content as well as one-of-a-kind local programming that allows everyone to discover more, to experience more and to be more. I am confident that this new collaboration will provide even greater service to the people of Central Florida.”

For more info about WUCF-TV, its program schedule and where you can find it on your TV, check out the station’s new website.

Despite lawmakers’ approval of a plan to extend the digital transition period until June, at least three Orlando stations may pull the plug on their analog broadcasts as early as Feb. 17. Public broadcaster WMFE-Ch. … MORE

Some say the future of journalism will be in non-profit groups. One Central Florida media executive is going see if that’s true. Former longtime WMFE TV and radio president and CEO Stephen McKenney Steck has … MORE

Erick Weber, who has appeared on The Tonight Show in comedy skits and most recently worked at WTMJ-NBC 4 in Milwaukee as a sports anchor, will join WKMG as its new morning and noon anchor, … MORE