The changes keep coming at Channel 9, and there’s a familiar face returning to town. WFTV announced this week that former anchor Jorge Estevez will be back on the Eyewitness News anchor desk starting June 4.

Estevez left WFTV in 2006 for CBS O&O WFOR-4 in Miami. He’s coming back to Orlando to report for WFTV but also anchor on sister station WRDQ-27 with Vanessa Welch at 6:30 p.m. and Martie Salt at 10 p.m. He’s replacing Josh Benson, who will be leaving WFTV-WRDQ after veteran Greg Warmoth was elevated as “heir apparent” for Bob Opsahl’s anchor chair.

Video of Estevez’s most recent audition at WFTV appeared to accidentally make its way onto the Internet and was indexed by Google earlier this week. Oops. But that’s OK.

Estevez is already going out of his way to ingratiate himself to his new co-anchors, sending them flowers — based on a picture posted on Twitter on Thursday. 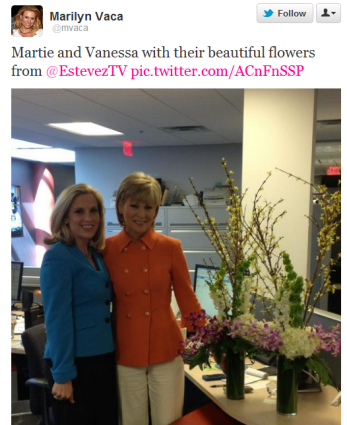 Martie and Vanessa with their beautiful flowers from @EstevezTV twitter.com/mvaca/status/1…

WFTV morning and noon anchor Vanessa Echols went through a very public battle with breast cancer four years ago. Today, she’s healthy, in remission and giving something back. She has  founded the Compassionate Hands and Hearts Breast Cancer … MORE

A couple of quick items to start off the new year … Congrats to former WESH anchor Shannon Hori, now at WFOR-CBS 4 in Miami. Last week she welcomed twin boys, Colt and Cade. “The … MORE

Blast from the Past continues with a bit of history in this classic advertisment. The date was June 14, 1973. You would think having an embattled President Richard Nixon in town give the commencement address at … MORE