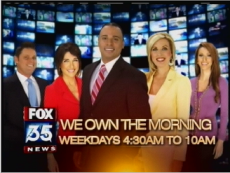 Just two weeks after WESH 2 launched the first 4:30 a.m. newscast in Orlando, it already has some early, early morning competition.

With little fanfare, WOFL-Fox 35 has expanded its morning newscast, now starting at 4:30 a.m. too. The Fox O&O now produces FIVE-AND-A-HALF hours of local news each morning.

Boasting “We Own The Morning,” the station ran a promo for the expanded morning newscast during Tuesday night’s Fox 35 News at 10. Also in the promo: anchor Keith Landry, who apparently has been taken off weekends and moved to the expanded morning show. That would answer the question I posed on Sunday, wondering if Fox had changed its weekend anchors. (I guess that’s a yes.)

So, how long until WFTV’s Eyewitness News Daybreak and WKMG’s Morning News also expand to 4:30 a.m.?

WOFL will start a 6 p.m. newscast beginning Monday. The Fox 35 10 p.m. anchors — Cale Ramaker, Corrina Sullivan and Glenn Richards — will be at the helm of the new newscast. The station … MORE

I guess this one depends on your point of view. You can take some comments made by former WOFL-Fox 35 morning meteorologist Jim Van Fleet as either a diss at Orlando TV news or someone who’s … MORE

Blast from the Past: INN on WOFL-TV 35

Today’s “Blast from the Past” newspaper advertisement comes from the February 15, 1981, edition of the (Orlando) Sentinel Star. It highlights the weeknight information programming on then-independent WOFL-TV 35. Like many independent stations, WOFL picked … MORE