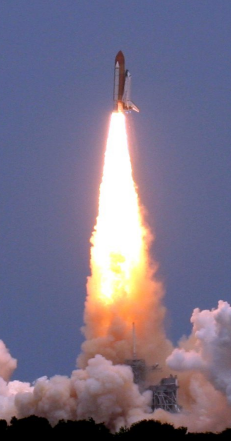 The “other” big event in Central Florida this week is the final launch of the space shuttle — Atlantis is scheduled to blast off on Friday.

The shuttle program has been a huge part of the area’s culture, economy and history over the past 30 years, so Orlando’s TV stations are rolling out specials to mark the end of the shuttle era.

All the local stations will be airing the final launch live. Here’s a blast from the past: the first shuttle launch, Columbia, on April 12, 1981:

WFTV weekend anchor Jorge Estevez is leaving Channel 9 to become the weekday morning anchor at CBS O&O WFOR in Miami, according to NewsBlues.com. Estevez has been with WFTV since 2001. Also, former WFTV general … MORE

Orlando’s CBS station is known today at WKMG-Local 6. But 40 years ago, it was just WDBO-TV Channel 6. And the station’s newscast was known as “Newsbeat.” Here’s a newspaper advertisement from November 1969 promoting … MORE

When Orlando’s TV stations — and all others in the nation — finally turn off their analog transmitters on June 12, some Central Florida viewers might be in for a surprise. Because of tower relocations … MORE