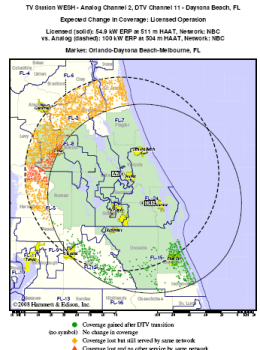 When Orlando’s TV stations — and all others in the nation — finally turn off their analog transmitters on June 12, some Central Florida viewers might be in for a surprise.

One of the big losers is WESH 2 (NBC). The good news: Homes with digital boxes in Polk, Brevard, Osceola and Indian River counties can pick up WESH’s digital signal — thanks to its digital broadcast tower being in east Orange county. The bad news: When WESH’s transmitter on its tower in Orange City is turned off, households in Pasco, Hernando, Citrus, Sumter, Marion, Levy, Alachua, Putnam, Clay and St. Johns counties won’t get WESH’s signal anymore. You can read more about WESH’s signal here.

Here’s how some other area stations will fare:

Orlando’s WFTV-Channel 9 is among seven TV stations across the nation being penalized by the Federal Communications Commission for violations of the Children’s Television Act of 1990.  WFTV was ordered to pay a $40,000 fine … MORE

Martinez signs off at WESH

Starting to catch up on the latest news … Anchor/reporter Raoul Martinez, who has been at WESH for about six years, is leaving the station. His last day will be Sunday, according to Sentinel TV … MORE

WESH has to be pleased with the massive number of people tuning in the Summer Olympics from Beijing. But the late-night anchors aren’t getting much sleep. They didn’t start the “11 p.m.” news until nearly … MORE