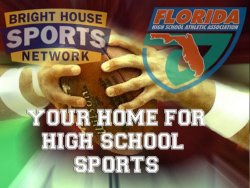 If you want to watch high school sports on TV, Bright House Sports Network is going to be your channel.

The cable sports station announced Thursday that it signed a three-year deal with the Florida High School Athletic Association — allowing it to produce and televise all state quarterfinal, semifinal and championship games in sports such as football, basketball and soccer. The station already airs more than 200 regular-season high school games.

Under the new deal, BHSN will televise a minimum of 60 high school post-season games each year in HD to Orlando and Tampa Bay customers. The channel is also teaming with Comcast, Cox, Charter, and Time Warner Cable to make available select games throughout Florida and 19 other states, expanding the number of potential households that will be able to view the games to more than 20 million.

“This is a historic development for Florida high school sports coverage,” Elliott Wiser, Vice President of Local Programming for Bright House Networks, said in a news release. “We are excited to partner with the FHSAA to produce a wide spectrum of sports live for our customers.  High school sports have quickly become an important part of the television sports landscape.”

Here’s more on the deal from the Orlando Sentinel.

The rumors are true: Bright House Networks will be adding its Tampa Bay cable news station, Bay News 9, to its Central Florida lineup this week. The sister channel for our News 13 is expected … MORE

As we predicted earlier, Bright House Networks announced Tuesday the addition of its Tampa Bay cable news station, Bay News 9 — as well as eight other channels to its Orlando offerings. The seven new … MORE

I suspect this isn’t how Bright House Networks subscribers planned to start 2009 — with a bunch of popular channels missing from their cable lineup. But that’s what may happen because of a dispute with … MORE