WOFL is now quite the ratings force locally, thanks in large part to Fox. But back in 1979, WOFL was just trying to survive. Orlando’s original “independent” station, WSWB-Channel 35, signed on in 1974 but ran into money troubles and went dark just three years later. A new ownership group returned Channel 35 to the air in 1979 — hoping for a little more success. Here’s an ad from November of that year, showing what Channel 35 had to offer Orlando viewers in prime time. And since it was still the swinging 1970s, check out the “groovy” slogan for the station too. 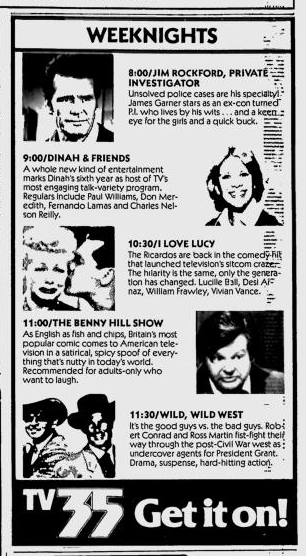 No March madness: WFTV still No. 1

The unusual — and basically meaningless — March sweeps ended on Wednesday. To no one’s surprise, WFTV-Channel 9 was once again the Nielsen powerhouse for Central Florida. The ratings numbers show 9’s Eyewitness News was the … MORE

You’ll likely be seeing some new faces on WESH soon, but the real question is whether these new faces will be replacing any existing ones at the station. WESH is advertising for an evening news … MORE

Blast from the Past: Channel 9’s daytime in ’61

We continue our Blast from the Past series with this Orlando Sentinel advertisement for WLOF-Channel 9 from Nov. 1, 1961. WLOF? Yep, you read that right. When it signed on in February 1958, Channel 9 … MORE