Blast from the Past continues with a bit of history in this classic advertisment.

The date was June 14, 1973. You would think having an embattled President Richard Nixon in town give the commencement address at UCF (then known as Florida Technological University) would be the top story on Orlando TV, but it wasn’t.

Tragedy struck in Central Florida. Two workers were killed when a 1,500-foot transmission tower — the tallest structure in Florida at the time — came crashing down in Bithlo. The tower included transmitters for Channels 6, 9 and 24 plus radio stations WDBO-92.3 FM and WDIZ-100.3 FM. The accident would have a profound impact on Central Florida media.

WFTV was off the air for several weeks after the accident. WDBO-TV was able to use an old backup tower, but with a greatly reduced transmission. Neither station would return to full power until more than two years. In the meanwhile, WESH-2 — with its transmitter in Orange City — became the dominant (and only full-power) station.

Here’s the advertisement from Channel 6 in November 1975 announcing that it was back to full power on a new TV tower. 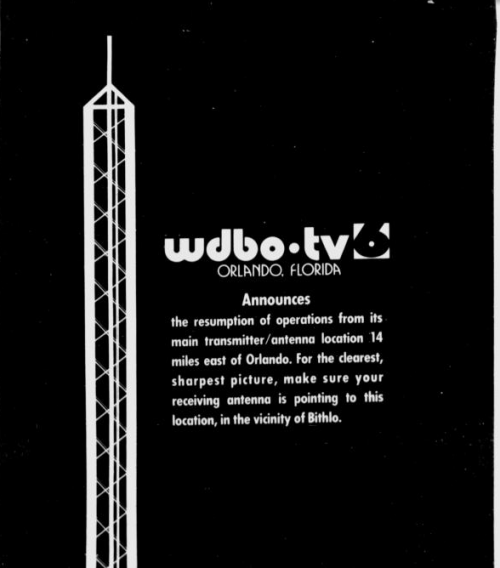 In a move that I doubt surprises anyone, WESH on Tuesday named Tony Mainolfi its new chief meteorologist, effective immediately. I believe he is just the third chief meterologist in WESH’s 50-plus year history, joining … MORE

A production technician at WKMG has been arrested as part of an Internet sex string. Christian Rodriguez-Torres, 19, was among 28 caught in the Polk County Sheriff’s Office’s latest operation targeting men wanting to have … MORE

As if the long, strange saga of infamous “tot mom” Casey Anthony could not get any stranger … it does, of course. This time it involves attorneys Orlando TV stations are using as legal experts … MORE