Blast from the Past goes back to 1986 today. That’s not that too far back, but a lot has changed since then. Take these advertisements for WMOD-Channel 43 for example.

In 1982, the Melbourne-based station became the area’s second independent station — following in the footsteps of Channel 35. WMOD had the staples of an indy station — classic sitcoms, movies, sports and even local newscasts. But it also had a very weak signal, which hindered its efforts to make a name for itself in Orlando TV.

Despite the slogan, “Don’t Stay Home Without Us” — many area homes went without WMOD.

Ownership eventually changed and the station became a Home Shopping Channel affiliate for awhile before becoming a Telefutura affiliate — which it remains this day. 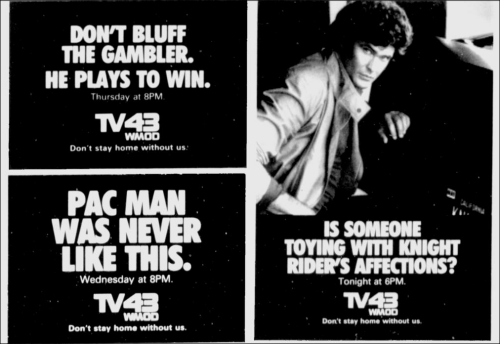 Blast from the Past: INN on WOFL-TV 35

Today’s “Blast from the Past” newspaper advertisement comes from the February 15, 1981, edition of the (Orlando) Sentinel Star. It highlights the weeknight information programming on then-independent WOFL-TV 35. Like many independent stations, WOFL picked … MORE

Blast from the Past continues with this ad for the 1968 NBC fall lineup on WESH-2. The online archives this came from are only in black and white. Too bad, since I believe the NBC … MORE

It’s hard to believe today after more than 30 years of local dominance, but WFTV-Channel 9 used to be the least-watched station for Orlando TV news. Here’s a newspaper ad from that era — when … MORE