Blast from the Past features an icon of TV talk shows, Mike Douglas.

This ad from November 1965 touts Douglas’ show on WESH-Channel 2 as a “merry go round of mirth and madness.” I vaguely remember the Mike Douglas Show, and not sure I would use the words “mirth” and “madness” to describe it. But hey, I was only 9 months old when this ad appeared. 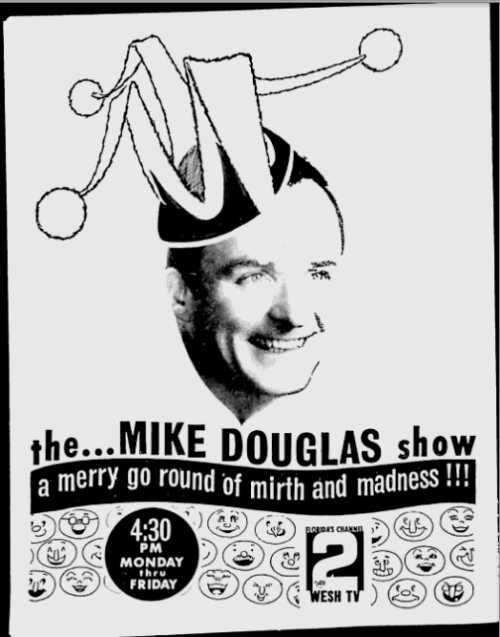 News That Won’t Slow You Down

Some quick hits for you today: >> WESH starts its Olympic coverage tonight with the debut of its nightly preview show, The O-Zone. News anchor Wendy Chioji and sports director Pat Clarke host the show … MORE

The Orlando Sentinel’s fun summer online contest, the Orlando Celebrity Smackdown, has its championship match up. The winner among all the local television personalities is WKMG chief meteorologist Tom Sorrells. He reached the finals by knocking … MORE

Former anchor Rondinaro back on air

Steve Rondinaro, who spent 10 years on the anchor desk in O-Town, is back reporting the news. He’s the new lead anchor and managing editor for WWAY-ABC 3 in Wilmington, N.C. Rondinaro was the main … MORE