It’s hard to believe today after more than 30 years of local dominance, but WFTV-Channel 9 used to be the least-watched station for Orlando TV news. Here’s a newspaper ad from that era — when “Eyewitness News” was just called “Eyewitness.” This advertisement from November 1971 shows that WFTV was trying — it had expanded its early evening news to a full hour, following the lead of WESH. The hour-long format didn’t take last — and it wouldn’t be until 1981 that Channel 9 went back to an hour of news in the early evening. 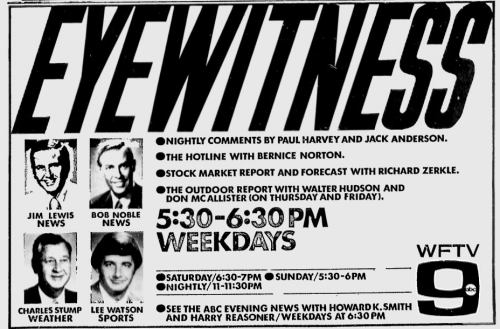 WFTV morning meteorologist Joe Smith is getting out of the weather biz … and the TV biz, too. According to NewsBlues.com, Smith has decided to enter the graduate engineering program at Cal-Berkeley this fall. After … MORE

WKMG’s THE 6 O’Clock News hour is about to get some competition. WFTV announced today that it will expand its Eyewitness News by a half hour in September, adding a 6:30 p.m. show on sister … MORE

Catching up on some Orlando TV News after taking a short blogging break… Yes, it’s really true. For the first time since its launch in 2002, WRDQ’s 10 p.m. newscast knocked off the No. 1 … MORE