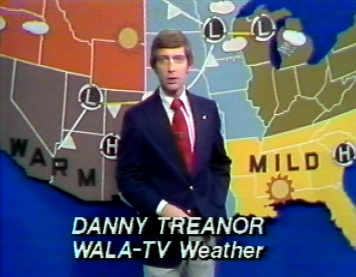 The station posted a lot of old photos on a Facebook account, and there was a familiar face in the gallery showing station folks from 1977. It was longtime Orlando weatherman Danny Treanor. Before he came to Orlando’s WFTV-Channel 9 in 1978, Treanor was forecasting weather up in the panhandle. Check out a couple of pictures of Treanor and others on the WALA-TV news team in 1977 here.

Orlando TV (and print) newsers come together for Christmas

It’s back. The Orlando Sentinel’s annual ‘Twas the Night Before Christmas video has been posted. In addition to Sentinel staffers, it also includes  prominent Orlando TV newsers, politicians, athletes and theme park characters reading the … MORE

Blast from the Past: Danny Treanor on WFTV

We continue our Blast from the Past series with this newspaper advertisement from 1978. It’s for weatherman Danny Treanor on WFTV. Back then, Danny did the weather on the noon, 6 p.m. and 11 p.m. … MORE

The fine readers of Orlando Magazine have once again selected the choices for “Best of Orlando” in a number of categories. Alas, RogerSimmons.com didn’t place among best local Web sites this time, but here are … MORE