Blast from the Past focuses today on WFTV-Channel 9 and ABC.

This ad is from February 1969, promoting the ratings-challenged news on ABC and Channel 9. Frank Reynolds was the anchor of the “ABC Evening News.” Ray Reuster — who would later have a long career with the Daytona Beach News-Journal — was at the helm of the “Channel 9 News.” (Yep, there really was a time when there wasn’t Eyewitness News on WFTV.) 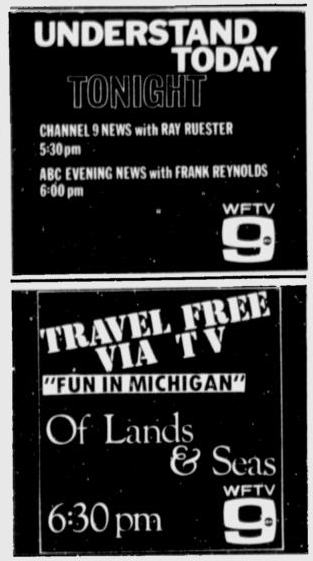 WFTV Eyewitness News anchorman Bob Ospahl opens up about his long career in Orlando in an interview with Sentinel TV Guy Hal Boedeker. For example, has Opsahl ever considered leaving Channel 9 and Orlando for … MORE

The November ratings for Orlando showed another dominating performance by WFTV’s Eyewitness News. By my count, WFTV has now been the No. 1 newscast at 6 p.m. for 29 years. And the Channel 9 juggernaut … MORE