Orlando’s CBS station is known today at WKMG-Local 6. But 40 years ago, it was just WDBO-TV Channel 6. And the station’s newscast was known as “Newsbeat.” Here’s a newspaper advertisement from November 1969 promoting some of the shows on Channel 6 during the day — including a double dose of Truth or Consequences. 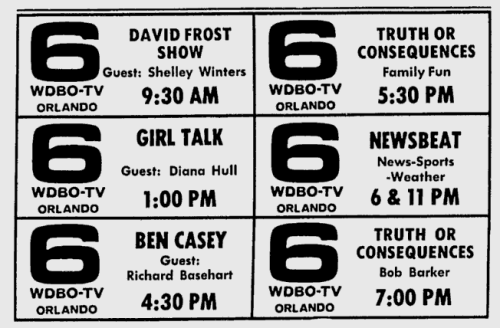 WFTV’s West back in news with Biden visit

Blast from the Past: Danny Treanor on WFTV

We continue our Blast from the Past series with this newspaper advertisement from 1978. It’s for weatherman Danny Treanor on WFTV. Back then, Danny did the weather on the noon, 6 p.m. and 11 p.m. … MORE

I had a post Wednesday about listening to Local 6’s 6 p.m. show on my car radio Tuesday and hearing a bizarre exchange between anchors Bob Frier and Jacqueline London. During a report about Girl … MORE