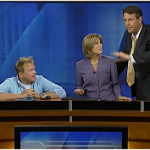 Here’s a clip posted on YouTube of WKMG anchor Laura Diaz and weatherman Eric Wilson taking part in a pitch to an advertiser. WKMG really, really wants attorney Dan Newlin to air his spots on Local 6. Dan hasn’t responded to emails and the station has been after him this past year, says sales guy Mike Oliver. So Mike “interrupts” the morning news last Friday with a special message: