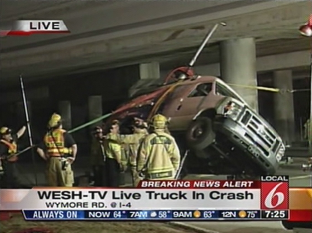 According to Local 6, the Channel 2 van nearly rolled over when the live mast became stuck under the I-4 overpass on Wymore Road, near WESH’s headquarters.

In video shown on WKMG, firefighters attempted to stabilize the vehicle before safely removing WESH reporter Greg Fox and a photographer, identified as “Frank.” Neither was injured.

According to the Orlando Sentinel, “The driver said he had been on Interstate 4 and passed under another overpass successfully and did not know how the mast got into the ‘up’ position.”

No March madness: WFTV still No. 1

The unusual — and basically meaningless — March sweeps ended on Wednesday. To no one’s surprise, WFTV-Channel 9 was once again the Nielsen powerhouse for Central Florida. The ratings numbers show 9’s Eyewitness News was the … MORE

Blago! WESH gets video of gov at Disney