Blast from the Past continues with this ad for the 1968 NBC fall lineup on WESH-2.

The online archives this came from are only in black and white. Too bad, since I believe the NBC peacock here was in its full color glory when this advertisement appeared in the Daytona Beach Morning Journal. 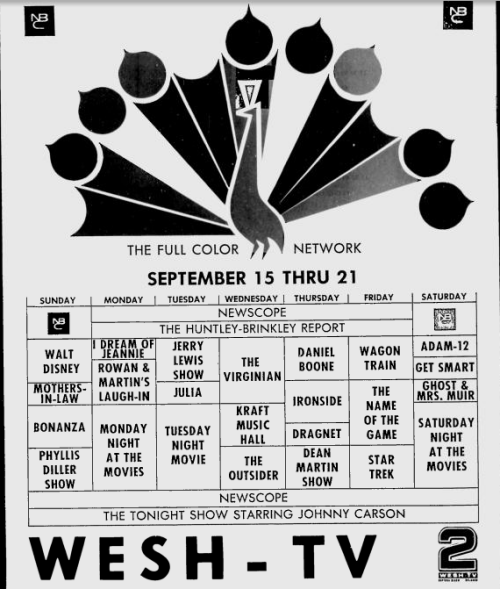 News That Won’t Slow You Down

Some quick hits for you today: >> WESH starts its Olympic coverage tonight with the debut of its nightly preview show, The O-Zone. News anchor Wendy Chioji and sports director Pat Clarke host the show … MORE

Blast from the Past: Channel 9’s daytime in ’61

We continue our Blast from the Past series with this Orlando Sentinel advertisement for WLOF-Channel 9 from Nov. 1, 1961. WLOF? Yep, you read that right. When it signed on in February 1958, Channel 9 … MORE

WESH Anchors Back Together Again

Marc Middleton, who is leaving WESH at the end of the month after 18 years at the station, is teaming up with former Channel 2 anchor Andrea Coudriet to form a media relations company. Middleton … MORE